Identification of off-odours in polymers

There are limits to the use of olfactorily contaminated plastics for the production of fresh materials. Odorous contamination of them needs to be minimised so that they are suitable for manufacturing new plastic products. A combination of analytical and sensor technology can help to identify olfactory contaminants and to check the efficiency and effectiveness of cleaning processes.

Anything or anyone that smells good is popular, whether food is involved, a car or the guy who lives next door. Nothing and no-one that stinks can expect to be really successful or enjoy a great career; that is at any rate the case with recovered plastics. This is attributable to the ability of polymer materials to adsorb different extraneous substances. Volatile organic compounds (VOC), for example, which can form deposits on the surface of plastics, find them extremely attractive.

As their name indicates, VOC are volatile and include odorant compounds that smell good and others that smell bad – which are known as "off-odours". This means that polymer materials from which packaging for cheese, shampoo or fabric softener is manufactured – to mention just a few examples – can take on the odour of the product they package either completely or partially.

The olfactory contamination resulting from this compromises further use of the plastic concerned. This means that the use of monomaterial and other physical parameters are not the sole criterion which determines whether a plastic can be reused to manufacture new material; the undesirable olfactory properties of the recycled product manufactured is important too. It plays a role that should not be underestimated in the use of recovered plastics to produce fresh materials.

About 6.15 million tonnes of plastic waste were produced in Germany in 2017: 84.5% after the plastic had been used and 15.5.% during its production and processing. 2.87 million tonnes (46.7%) of the total plastic waste were reused to produce new materials. 3.24 million tonnes (52.7%) were, on the other hand, used to generate energy: 2.14 million tonnes in refuse incineration plants, while 1.1 million tonnes replaced fossil fuels in such places as cement factories or power plants. 67.6 (90.7%) of the waste produced in plastics manufacturing and processing were recycled. Only 42.2% of plastic waste from private households was reused to manufacture new materials, however, while this figure was only 34.3% in the case of plastics used in commercial applications. The reason for this difference: most of the plastics used in industry are very clean and are made from a consistent material: in households and many commercial operations, on the other hand, they are contaminated and also mixed.
Source: German Environmental Agency, plastics waste, https://www.umweltbundesamt.de/daten/ressourcen-abfall/verwertung-entsorgung-ausgewaehlter-abfallarten/kunststoffabfaelle

Other factors affect odour too

The olfactory impression made by a plastic is influenced not only by the contents it packages but also by other factors, such as the way it is disposed of (see box 1). Plastics that are left over as waste or trim during production or processing and that can be fed back into the production and processing operations more or less directly on the manufacturing line, depending on the material type and consistency, are only contaminated by extraneous odours to a minor extent if at all. Plastics that have been disposed of in classic household waste or have been used in commercial applications tend to cause greater odour problems, on the other hand. It is highly probable that these polymer materials have been subject to biological or chemical decomposition processes, in the course of which odour-active substances can be emitted as well and can contaminate the polymers. It is not unusual for cleaning and deodorisation operations to be necessary in order to be able to produce new materials from olfactorily contaminated plastics. 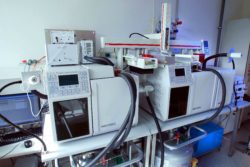 Whether the aim is to evaluate the odour contamination of used plastic packaging, to optimise cleaning processes for recovered plastics or recycled materials or to issue recommendation for efficient and appropriate waste sorting: the correct analytical strategy and suitable analytical technology are always the basis. The Fraunhofer Institute for Process Engineering and Packaging (IVV) in Freising / Germany has both – the strategy and the technology – as well as extensive polymer analysis know-how. The results of the research projects carried out by the IVV are documented in a variety of respected scientific publications [1-4]

What approach needs to be adopted in the odour analysis of plastics, however? Dr Philipp Denk from the IVV explains that the detection of aromatic substances in food provides guidance here, because it can be applied to other application areas too. A brief look at the different operations carried out in the laboratory makes it clear what procedure is involved here:

Operation 1: sensory classification of the samples. A sensory panel consisting of several people who are trained to identify odours and describe them accurately carries out a sensory evaluation of the samples in the context of a "classification test" in accordance with DIN ISO 8587: 2010-08. Dr Philipp Denk says: "In this way, it is possible to specify an initial overall odour impression, which is important for the subsequent work". This operation is followed by a gas chromatographic analysis of the samples, combined with another sensory evaluation via olfactometry (O) using a special port on the GC to facilitate nose sniffing with the aim of characterising the individual odorants present in greater detail. For this purpose, the odorants are, however, extracted from the polymer first (see operation 2).

Operation 2: extraction of the VOC from the polymer matrix. With the help of a suitable solvent, such as dichloromethane, the components that are often only present in traces in the sample but have strong odours are extracted from the polymer matrix and are separated from the non-volatile components in a high vacuum using solvent-assisted flavour evaporation (SAFE) technology. Dr Philipp Denk reports that it is important to proceed gently here, in order to make sure that "no unstable odour-active compounds are impacted and no new ones are formed during the operation, which would distort the analysis". The extract produced is filtered and concentrated and an odour extract dilution analysis (OEDA) is carried out.

Operation 3: odour extract dilution analysis. Aroma analysis has shown that it is often the case that only very few substances determine the characteristic odour, even if many different volatile compounds may be present in a sample. In order to detect these few relevant components, the extracts from a series of consecutive dilution operations are separated via gas chromatography and are evaluated via olfactometry, i.e. they are evaluated by a sensory expert using the human nose via a sniffing port (e.g. ODP) at the end of the separation process. Dr Philipp Denk reveals: "Odour-active volatile components can be detected in this way and can be attributed by comparing them with reference substances".

Operation 4: identification of the odour sources by 2D-GC-MS/O. The compounds that are particularly responsible for the odour are identified finally by a combination of gas chromatography-mass spectrometry and olfactometry (GC-MS/O) and – in the case of interaction between different signals / substances – by two-dimensional gas chromatography-mass spectrometry in combination with olfactometry (GC-GC-MS/O).

Example of a 2D chromatogram of the odour detection of old plastics packaging measured and recorded with the 2D-GC-MS/O system shown in the photo above. Source: Gerstel / IVV

Chemical engineer Thomas Albinus, an application chemist who is responsible for GC-MS/O at a leading supplier of high-performance olfactory detection equipment for GC/MS-O, says that users can already start to identify compounds solely on the basis of their odour after training their olfactory skills and combining these skills with suitable technology and a little experience. The company holds training courses to provide theoretical and practical know-how about how to make a successful start not only on analytical technology but also on using the nose to detect and identify odour sources. An intensive study of the subject is, however, essential, in order to become an expert, e.g. for the evaluation of olfactorily contaminated plastics.

The various substances detected, for example, in plastic packaging waste, have a wide range of different odours. "Including molecules that smell mouldy, cheesy or florid", explains Dr Philipp Denk. According to the IVV expert, some of the components with a strong odour have been identified for the very first time in plastic. It has apparently also become clear that other processes can lead to odorous contamination apart from odorants from the earlier – i.e. packaged – contents such as food or cleaning products. They include not only microbiological decomposition processes but also ageing processes to which plastics are subject and the decomposition of minimal production residue like traces of solvents.

Contamination by off-odours is, however, lower when, for example, used plastics are kept separate throughout their life cycle and have as a rule been contaminated minimally, as is the case with PET beverage bottles, for instance, which can be kept almost entirely in a closed loop for a specific period of time and can be reused for comparable applications ("upcycling"). Dr Philipp Denk says that just the collection of packaging waste in "yellow sacks" or "yellow bins" (as is the case in Germany) helps to recover polymer materials that can be used effectively in the production of new plastics. He does, however, add that these new plastics are not generally completely free of off-odours. Which means that deodorisation is necessary for them to be reused. The IVV claims that their findings make it possible to evaluate cleaning operations as well as to develop appropriate odour avoidance strategies in recycled plastics and to establish them in practical industrial operations.

What is important when working with an olfactory detector

Sensorily effective smelling has to be learned. A key skill that is needed in this context is a suitable technique, which users can, however, learn in workshops [5] and by experience. Because what are important are not just "analytical" aspects but also a certain amount of comfort and convenience when using equipment. The "Olfactory Detection Port 4" (ODP 4 [6]), for example, allows the operating position to be chosen and fixed freely, which has positive ergonomic impact on the sensory evaluation of fragrances using the nose parallel to MS detection. The new design makes operation more pleasant, not least of all due to a low surface temperature – even without a glass funnel – which permits more sensitive perception with a lower make-up gas flow rate. The nose positioning mark is adapted to satisfy individual requirements. The nose can be located in the optimum position, something that is appreciated by all users, not only those who wear glasses. Another strength of the ODP 4 is the smooth transfer of high-boiling substances. The "Sniff&Trap" option allows specific analytes to be recorded anywhere on the chromatogram in a thermal desorption tube. The equipment includes the Olfactory-Data-Interpreter (ODI), which permits fast and reliable attribution and identification of odours, while it is also helpful in the evaluation of OEDA data, panel data and cumulative olfactograms.

[5] Analyzing with all senses, introduction to olfactory detection, workshop from 22. to 24. September 2020, Details: http://www.gerstel.de/de/workshop-odp.htm 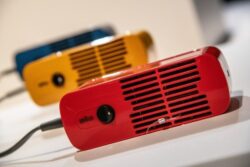 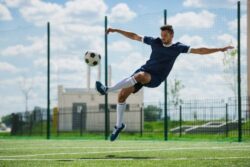