Plastics are an indispensable part of today's society. These nimble polymers help keep foods fresh, cars safe, arteries clog-free and have countless other uses. But the benefits come at a cost. Each year millions of tons of discarded plastic pollute ecosystems, harm animals and exacerbate climate change.

Now, a $4 million award from the National Science Foundation's EPSCoR RII Track 2 program will bring together researchers from Kansas and Delaware and fund work to improve how plastics are manufactured and recycled.

Exhibitors and products around research and science:

First, they will develop sustainable ways to turn non-food biological resources — like grasses or crop leftovers — into plastic products, helping promote rural economic growth for farmers. Second, the team will find better ways to deconstruct used plastic to turn it into the building blocks for new plastics.

"This award highlights the key role Kansas plays in advanced manufacturing and how they continue to innovate in critical areas such as renewable plastics that will benefit the entire nation," said NSF director Sethuraman Panchanathan. Panchanathan visited KU's Lawrence campus in september with U.S. Sen. Jerry Moran to meet researchers who are leveraging NSF funding to advance discovery and innovation. 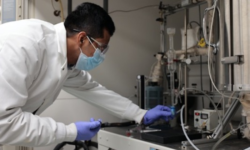 But Subramaniam said that solving the plastic pollution challenge requires more than just chemical innovation. Public policies are essential as well. KU's Institute for Policy & Social Research will help develop software for modeling the economics of the new technologies, shedding light on policies that incentivize job creation and energy independence in the U.S.

The four-year project is expected to stimulate discovery, innovation and workforce development in Kansas and Delaware. The program will also mentor junior faculty and establish a Postdoctoral Program for Faculty Diversity to support women and underrepresented minorities in this career path. The team has strong partnerships with agribusinesses and chemical companies that will also help steer the innovations toward commercialization and promote advanced manufacturing initiatives.

KU's award is one of nine awards announced by the NSF today that fund collaborative teams of investigators in scientific focus areas consistent with NSF and national priorities. Both Kansas and Delaware are targeted jurisdictions for the NSF EPSCoR, which stands for Established Program to Stimulate Competitive Research. The 40-year-old program targets areas across the country — about half of all U.S. states — to strengthen their capacity and capability in science, technology and engineering. Since 2006, KU has received 11 EPSCoR awards totaling more than $72.4 million.

Subramaniam is one of five professors who will lead and supervise specific parts of the research. Others include Alan Allgeier, associate professor of chemical & petroleum engineering and CEBC deputy director; Donna Ginther, Roy A. Roberts Distinguished Professor of Economics and director of KU's Institute for Policy & Social Research; Timothy Dawsey, executive director of the Kansas Polymer Research Center at Pittsburg State University; and Raul Lobo, Claire D. LeClaire Professor of Chemical & Biomolecular Engineering at the University of Delaware. 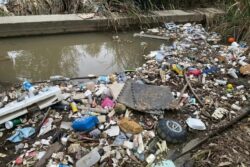