Northwestern University chemists have taken inspiration from plants to revolutionize the way an important industrial chemical is made. 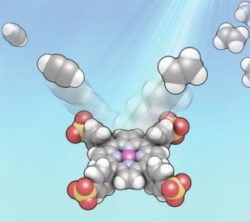 In a first for the field, the Northwestern team used light and water to convert acetylene into ethylene, a widely used, highly valuable chemical that is a key ingredient in plastics. While this conversion typically requires high temperatures and pressures, flammable hydrogen and expensive metals to drive the reaction, Northwestern’s photosynthesis-like process is much less expensive and less energy intensive.

Not only is the new process environmentally friendly, it also works incredibly well - successfully converting nearly 100% of acetylene into ethylene."In industry, this method requires energy-intensive processes that need high temperatures, an external feed of flammable hydrogen gas and materials containing noble metals, which are expensive and difficult to obtain," said Northwestern’s Francesca Arcudi, co-first author of the study.

"Our new strategy solves all these issues at once. It operates using light and water in place of high temperatures and hydrogen. And instead of expensive metals, we use naturally abundant, inexpensive materials." The resulting strategy worked shockingly well. Whereas the current industrial process results in 90% selectivity for ethylene, the Northwestern approach has 99% selectivity for ethylene."This is important because it's a commodity chemical with high economic value," said Northwestern's Luka Ðorđević, co-first author of the study. "The more you can produce without waste, the better." The study will be published on Thursday (June 9) in the journal Nature Chemistry. It is the first report of researchers using light to convert acetylene to ethylene.

This paper is a result of a collaboration between Emily Weiss and Samuel I. Stupp and their joint effort as part of the Center for Bio-Inspired Energy Science (CBES) at Northwestern. Weiss, a professor of chemistry in Northwestern's Weinberg College of Arts and Sciences, is the paper's corresponding author. Arcudi is a postdoctoral researcher in Weiss’ laboratory. Ðorđević is a postdoctoral fellow in Stupp's laboratory. Stupp is the Board of Trustees Professor of Materials Science and Engineering, Chemistry, Medicine and Biomedical Engineering at Northwestern, with appointments in Weinberg College, the McCormick School of Engineering and Northwestern University Feinberg School of Medicine.

"At CBES we strive to address fundamental challenges by taking inspiration from nature," said Stupp, the director of CBES. "Vitamin B12, one of a few naturally occurring organometallic co-factors, was used in this paper as a source of inspiration to design our catalyst." As the precursor to 50-60% of all the world's plastics, ethylene is a hot commodity. In order to meet the ever-increasing demand for the valuable chemical, industry produces more than 200 million tons of ethylene per year. To generate ethylene, chemists use steam cracking, an industrial method that employs hot steam to break down ethane into smaller molecules, which are then distilled into ethylene. But the resulting chemical contains a small amount of acetylene, a contaminant that deactivates catalysts to prevent ethylene from properly converting into plastic. Before the ethylene can be turned into plastic, the acetylene must be removed or converted into ethylene.

"The removal or conversion of acetylene in order to get pure ethylene is a process that’s well known in the industry," Weiss said. “The process has many problems, which is why the scientific community has been trying to propose an alternative to this process. Producing polymer-grade ethylene from carbon dioxide feedstock is a desirable alternative, but this route is not developed enough yet. Our strategy is a first and major step toward producing this important commodity chemical with the lowest energy footprint possible.”

In particular, an incredible amount of energy is needed to reach the high temperatures and pressures required for a successful chemical reaction. It also requires expensive catalysts made from noble metals, such as palladium. And because the process relies on protons from hydrogen, which is produced from fossil fuels, it generates vast amounts of carbon dioxide. Northwestern's strategy bypasses all these issues. To convert acetylene to ethylene, Northwestern's chemists replaced the palladium catalyst with cobalt, a less expensive, more abundant alternative. They also used room temperature and ambient pressure. In place of heat, they used visible light. And, finally, they replaced hydrogen with plain water as a source for protons. 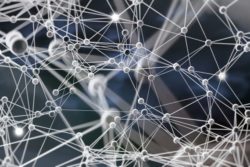 A unique catalyst paves the way for plastic upcycling 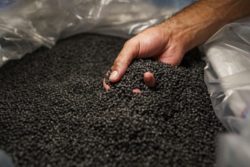